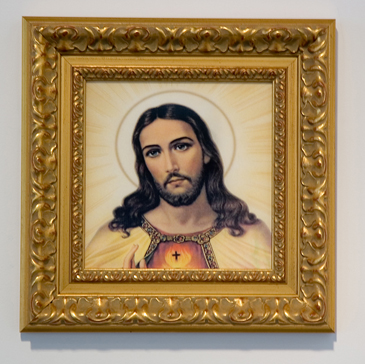 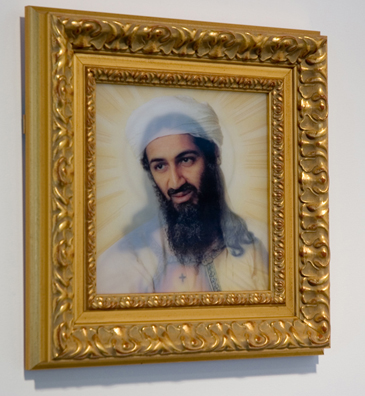 This work is concerned with relationships between contemporary popular culture, and the futures we (for better or for worse) create.

It is not intended as a statement but rather as a means to ask questions. In particular, I’m questioning the relationships between media, popular culture, and the development of truth, history and ideology.

When you observe these two people, Osama Bin Ladin and Jesus, their ethics could not be more different. But they were both pursued by two of the world’s most powerful armies – the US and the Roman armies. Jesus is clearly defined by history, but I am interested in how history will treat the image of Osama.

There is a very real possibility that by giving such significant media attention to those who commit crimes and advocate violence, we may inadvertently elevate of them to a status where in some circles, they are perceived as sacred and holy – revered in the same way we revere Jesus.

This work has quite an open text so people are likely to read the image in many different ways. Some have mentioned they see it as a juxtaposition of good and evil, whilst others are interested in its comment on how iconic figures are created.

To me this work is a cautionary tale about our fixation with crime, violence and catastrophe. Access to information is important and there are instances where this has been well balanced with the temptation to sensationalise. No war was declared against the Lockerby bombers. Instead they were extradited and tried for murder amidst media coverage that left few people with a lingering memory of their names. Similarly, Martin Bryant was moved to an inner cell in his Tasmanian prison to ensure his media attention did not turn him into a cult figure like Charles Manson. There is a wisdom in this approach that has been forgotten in the case of Bin Laden, and this lapse may have unintended, unwelcome effects in the future.